Illumination #1 is an exploration of identity. By animating specific gestures, story fragments, and names, Rose Bond aims to evoke the past, the peoples, and the accretions of memory held and reflected in the second story windows of the historic Portland Seamen’s Bethel Building. The piece, which calls up 120 years in 12 minutes, draws from six epochs specific to the site:

“A brilliant, groundbreaking concept executed with tact and craft. Don’t miss it.
Just about the coolest made-in-Portland movie of all time and it’s free.”
—Shawn Levy, The Oregonian

“.. a sight like few others you’ll see this year…more than a conceptual installation…if last week’s preview is any indication, car traffic will stop, crowds will assemble and rapt silence will soon prevail as vibrant waves of colorful, lighted imagery roll across the derelict building like dancing ghosts. Set against the evening sky, Illuminations #1 lived up to its promise: A historic palette magically lighted out of thin air. Patrons at Hobo’s, a bar across the street, stood in the windows with their drinks in hand, entranced.”
—D.K. Row, The Oregonian

“When Portland animator Rose Bond flashed some images on the windows of an Old Town building last May, this newspaper’s film critic called the resulting artwork ‘Just about the coolest made-in-Portland movie of all time.’ Seems he wasn’t the only one impressed…” —The Oregonian, February 2004

“Bond turned an Old Town building into a luminous work of art that literally glowed with dancing images…car traffic stopped, crowds assembled in the middle of the street, and rapt silence prevailed on the night it opened.” —The Oregonian 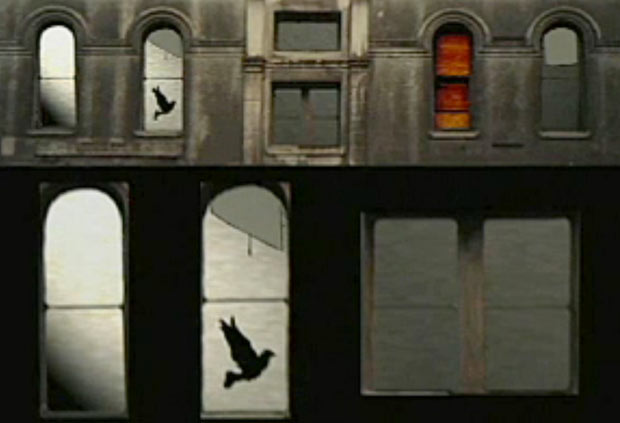 Illumination #1was sponsored by The Old Town History Project

A 12-minute documentary of the installation is available in VHS and DVD formats. Contact sales@rosebond.net.